By Jeff Koch from August 2021 issue of Hemmings Classic Car

Currency devaluation and overseas work helped one owner buy a new 1968 Jaguar E-type. He kept it for 50 years.

Franklin Sheffer was on a college field trip to New York City when he fell in love. "On that trip in 1962, I saw my first Jaguar E-type up close… It was way ahead of its time, and I determined that I would buy one as soon as I could afford one."
Who could blame him? Jaguar's E-type was an instant sensation when it launched at the Geneva Motor Show in the spring of 1961. In this country (where it went by the name XKE), most college kids weren't quite in the market for one unless they cracked open the family trust. But Franklin was patient. Six years patient. 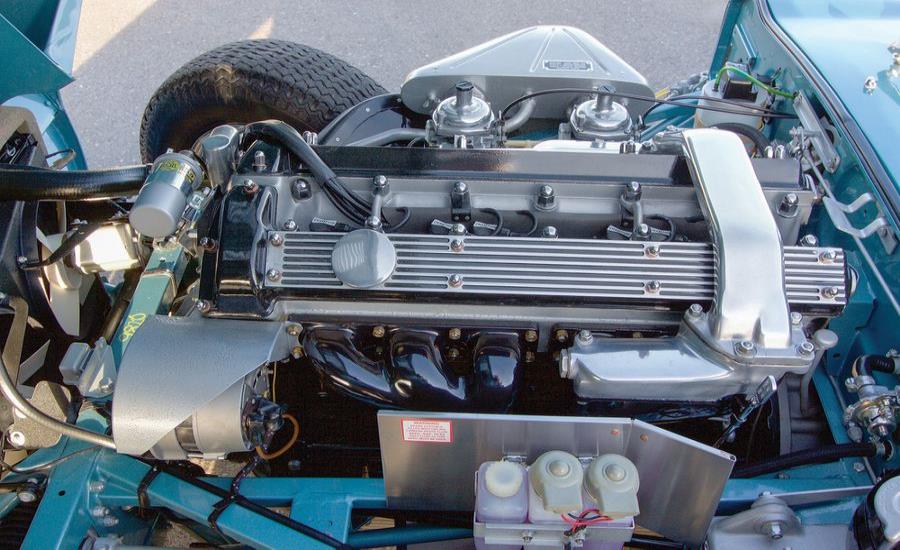 Jaguar's twin-cam inline-six was a bona fide legend in its day; punched out to 4.2 liters, this American-market Series 1.5 version uses two side-draught Stromberg carburetors, rather than earlier models' triple Webers. Output was advertised as 247 horsepower.

You could well argue that during those six years, the E-type had its bugs worked out. Jaguar's flagship sports car had been enjoying a line of steady upgrades since its 1961 launch: punching out the twin-cam inline-six's bore, raising displacement from 3.8 liters to 4.2 liters, offered the same 265 horsepower but boosted low-end torque; it got a stiffer crankshaft, improved cooling, and an alternator replaced the original dynamo; a less-fussy, all-synchro Jaguar-built four-speed transmission with chamfered gears arrived in '65 to reduce noise; the four-wheel-disc brake system was simplified; legroom was increased by altering the floorpans, and more generously proportioned seats were added. Starting in 1967, E-types lost their covered headlamps, and American models were given twin Stromberg carburetors, reducing power to 246 gross horsepower. Purists will always hold the earliest models aloft in their hearts, but there's little argument that, as a daily-driven proposition, later models were dynamically and reliably improved-so much so that these have been dubbed "Series 1.5" by the enthusiast community. Just 1,994 Series 1.5 E-type convertibles were built for 1968, making them a rare breed of cat today.

But Franklin just wanted an E-type-and he was able to make it happen in the spring of '68 when a happy confluence of events allowed him to obtain the Jag of his dreams. The first event was a government-mandated devaluation of the British Pound Sterling in November 1967; locking the Pound in at $2.40 U.S. dollars made for a 14-percent discount for Americans, literally overnight. The second event was Franklin walking in the front door of the factory and ordering what he wanted on the spot, rather than going home and ordering through his local dealer. "On my way home to the USA from a job in Liberia, West Africa," where Franklin was working to develop an iron ore pelletizing plant as a joint venture between the Liberian government and two private companies (one American, one Scandinavian), "I stopped in at the Jaguar factory in Coventry, England, in March 1968, and ordered the car to my specifications." And why not? An E-type roadster cost just under $4,100 in England and $5,372 in the U.S.-a 24-percent difference. That was a healthy chunk of change when it came time for Franklin to get his wallet out to purchase his first-ever, brand-new car. 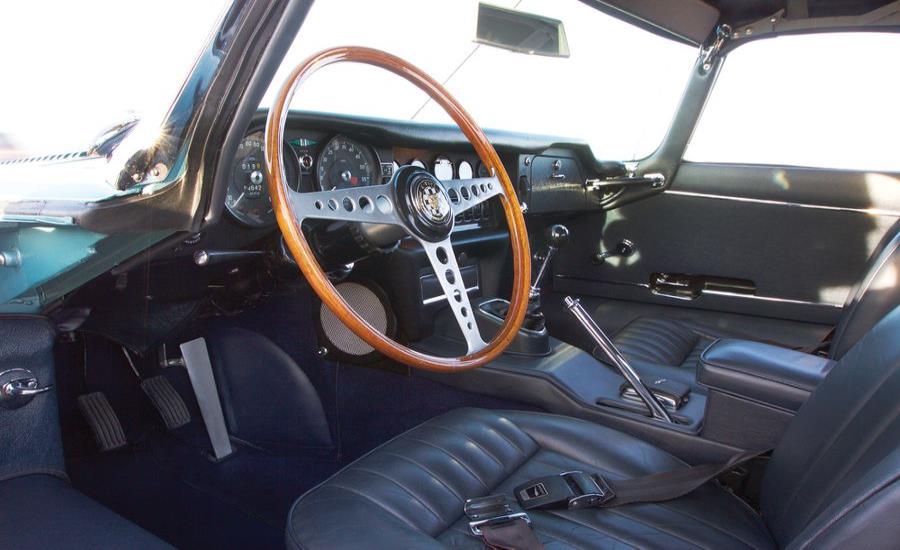 The dark blue leather interior was specified by the original owner to match the soft-top. Early E-types had a metal applique across the instrument panel, but, by 1968, it was gone, with low-gloss textured black plastic in its place.

The E-type was a pretty complete sports car as it sat, so Franklin's specifications were hardly overwhelming. The order included Opalescent Blue Metallic paint, a dark blue interior and soft-top, a detachable body-color hardtop that would later more than pay for its initial $165 cost, chrome wire wheels for $114, whitewall tires for $25, and tinted glass for another $25-not much, all things considered. Stir in the cost of shipping to the Port of Newark, in New Jersey, along with some other miscellaneous sundries, and the total cost was $4,693. So, Franklin saved money both by ordering from the factory and by getting around official import channels. Even adding options, ordering direct from the factory saw it arrive at the dock at a total cost 13 percent cheaper than a base E-type brought in through conventional means. 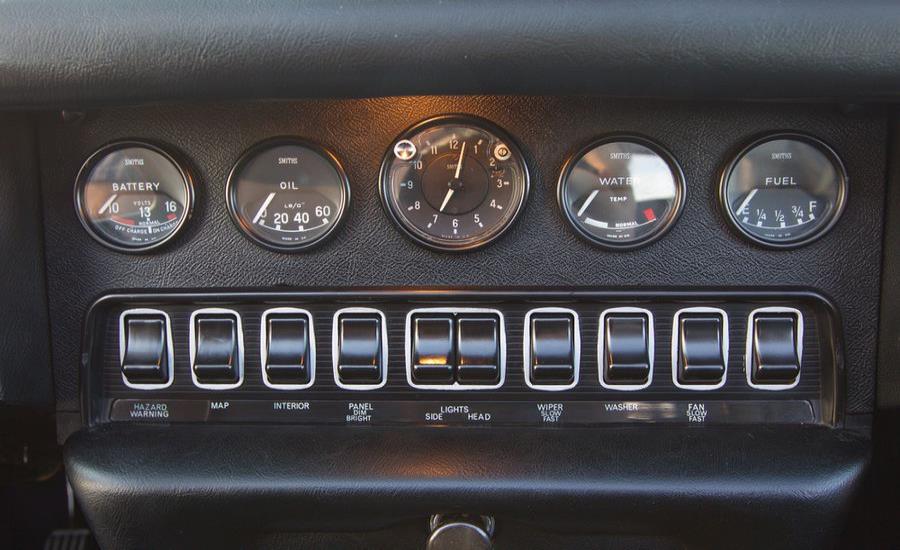 "It was built April 26, 1968, and was registered in the U.K. in June of '68 with the license plate NWK 592F. It was then loaded on the steam ship Moshill at the Dagenham dock, U.K., and shipped to Newark," Franklin told us. "I took receipt of the car at the Newark docks on October 21, 1968.
"I never had any difficulty with it … there was talk about E-types getting out of tune and everything, but in 1968 Jaguar switched to the two-Stromberg-carburetor setup, and they stayed in tune for me. I never had trouble starting it. It was wonderful. 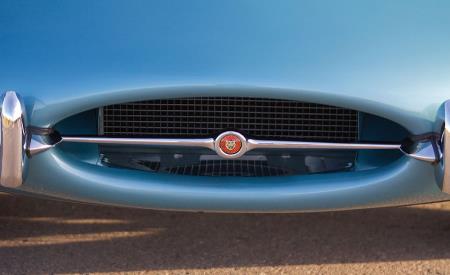 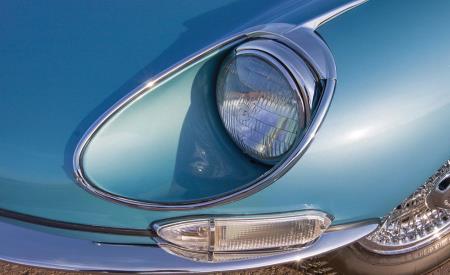 "I drove it every day in Pennsylvania no matter what the weather, including ice and snow. Later, I courted my future wife in it, and we got married in September 1970. In September 1972, my son Sid was born, and he would ride in a car seat on the armrest between the seats. He had his first ice cream cone in that car. It wasn't really a family car, though, so we had to buy something larger. But even when we were going somewhere and we walked to the family car, he would still point at the Jaguar, telling us he'd rather ride in it."

The E-type still saw regular use, though-possibly too much. "Over the years, ice, snow, and salt took their toll, and it deteriorated as I drove it less and less. Then a truck backed up over the nose, damaging the raised center section of the bonnet. Later it was stored in a friend's warehouse." Cold storage, avoiding the eroding elements any further … right? No. "A snow and ice storm caved the roof of the building onto it. It had the hardtop on it at the time, so it didn't break the windshield and frame-but it did put a bunch of dents in it." The hardtop probably saved it from being totaled.

Enough was enough. After having spent years collecting parts and investigating shops, Franklin says "I took it to Lou Ottaviano, who owned Lindley Motors and Restorations in Sanatoga, Pennsylvania." The result was award-winning, but looking this good didn't come quickly or cheaply. "I thought it was going to cost X dollars, but he said it would cost 2x dollars. He finally finished it in the spring of 2006 at a cost of 6x dollars." And timing? "It was supposed to be ready for my son's high school prom and graduation…but it didn't make it. Then Sid went to Penn State and graduated … and it still didn't make it. He then worked for five years and went to the University of Texas to get his MBA… but it still didn't make it.
"If I had to do it all over again, I would have started the restoration earlier and not let it get into the sad shape it was in when we started. I also would have taken better care of it originally. As it was, it would have been cheaper and faster to have found a car that didn't have as much damage, but this was the car that I had bought new. I would have stopped, but I had promised my son, so I persevered and had it finished." While the shop is still in business, Franklin tells us that this is one of the last cars Lou completed before his passing.

With that 6x dollar figure still rattling around in his head, Franklin shifted focus-from having a car that he could once again drive and enjoy as he did when it was new, to having the nicest E-type in North America. "Since I then had more money invested in it than I could get from selling it, I decided I'd show it and try to win a national championship."
A national championship, singular? No. From its 2006 completion, the very E-type you see here has won at least four dozen awards at JCNA-sponsored events across the country, including 16 Best in Shows, a nice round dozen national championships, and too many First in Class awards to count. "Usually the oldest car wins at these events," Franklin says, "but mine would beat out some of the older cars." 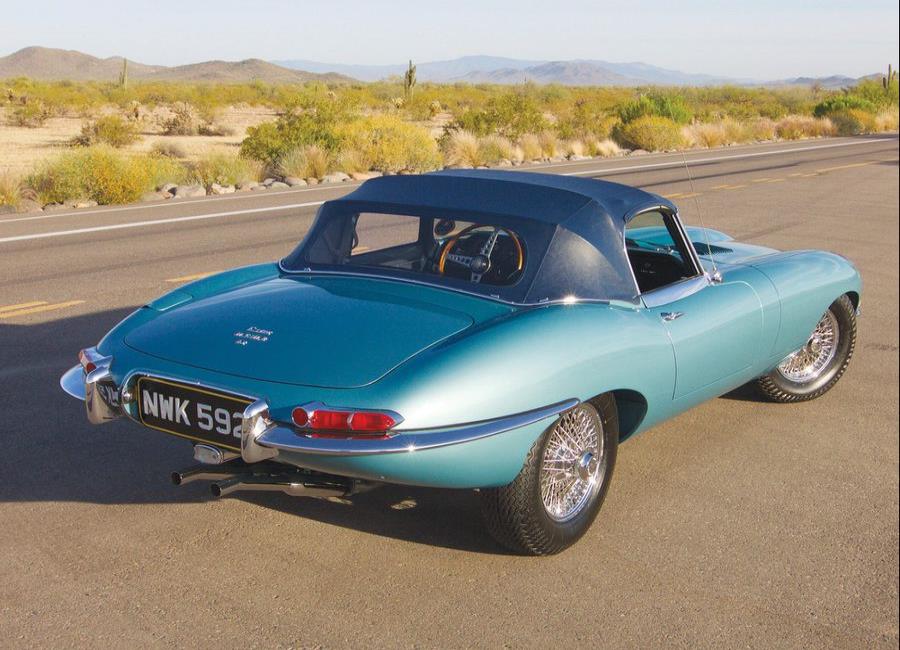 Alas, the car that captivated Franklin from new, and that had so bewitched his son Sid from an early age, moved on to a new home. Franklin had a couple of health issues, and had retired to Shreveport, Louisiana, some years prior. He decided he was going to renovate his house; "To do that, I had to sell the Jaguar." Sid agreed-reluctantly, by all counts, since he was counting on it being his someday. It is a matter of public record that Franklin's E-type roadster was sold by Worldwide Auctions at Pebble Beach in 2018, for the jaw-dropping sum of $247,500. "The buyer was a collector who has a museum in Elkhart, Indiana," Franklin recalled. "The auction wouldn't tell me exactly who bought it. They did tell me that one of the bidders was the Jaguar Heritage Museum-that made me feel pretty good, that they wanted to take it back to England.

"I wish I hadn't sold it now," Franklin says. "I miss getting out there and driving it." 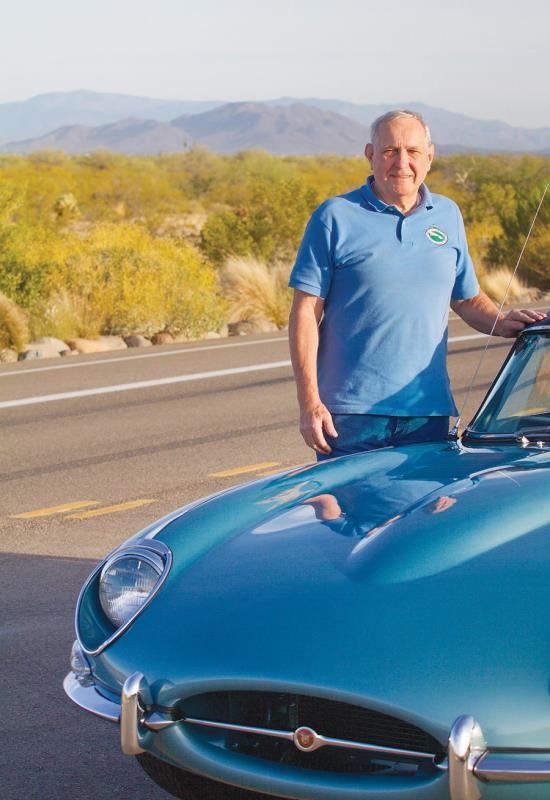