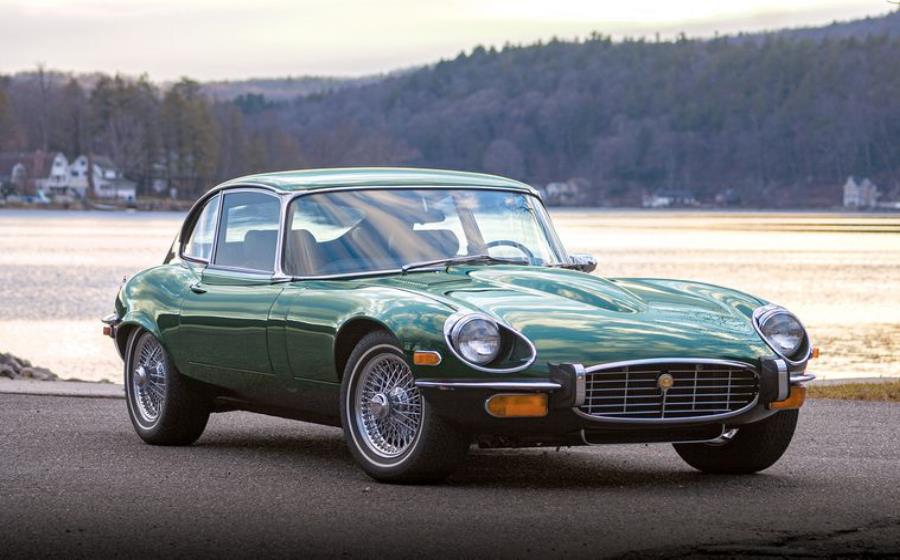 The automotive design world had fallen for the wedge by the early 1970s; Sixties curves were suddenly passé. The fickle finger of fate pointed at Jaguar's lauded, long-lived E-type with condescension. That DOHC straight-six-powered sports car, the one that electrified the world upon its March 1961 debut and honoured its creators with countless racing victories and impressive sales volumes, was graying at the temples. Increasing demands upon the car to meet stricter U.S. emissions standards and to provide more occupant comfort had taken their toll on its legendary performance. But Jaguar had been working on a fascinating new all-aluminium V-12 that would become its flagship engine for decades to come, and that lovely lump would give the E-type its final blast of relevance. The Series 3 Open Two-Seater (OTS) and 2+2 coupe were powerful and refined grand touring sports cars, and they remain uniquely desirable 50 years on.

The E-type that was unveiled on March 25, 1971, at the New York Motor Show- still called "XKE" by the company's U.S. marketers-signalled a sea change for its maker, and gave Jaguar a prestigious cylinder count then rivalled only by Ferrari and Lamborghini. The engine wasn't the only big change for this model: the two-seat Fixed-Head Coupe was no longer available, and the OTS now shared the 2+2 coupe's 9-inch-longer wheelbase, bringing notably more interior room for wind-in-the-hair fans. Other changes were easy to spot: A larger front air intake was capped by this model's first grille; fenders flared over 15 x 6-inch chromed steel or 72-spoke wire wheels; ventilation grilles pierced the 2+2's hatch and the OTS' optional fiberglass hardtop; and four exhaust tips made a dramatic exit in the rear. 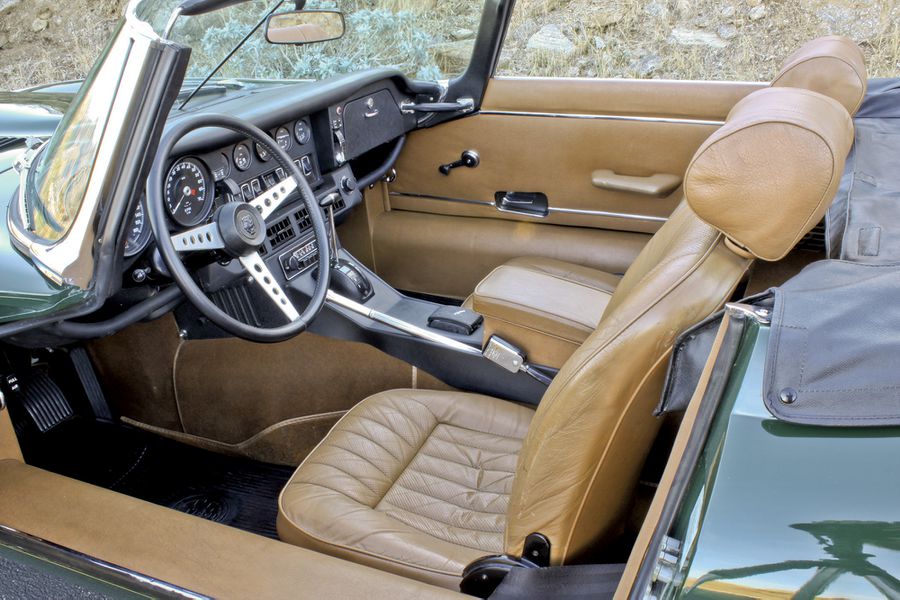 Interior trimmings and replacement parts availability for the Series 3 E-type remain very good. Almost half of V-12 examples were built with the Borg-Warner three-speed automatic transmission, which is known to have reparable leaks; both that and the fully synchronized four-speed manual are notably durable.

The closed variant was built in 10 times the volume of the open one for 1971: 3,406 to 340. But the scales were more even for 1972 (1,994 to 1,711) when running changes included redesigned heater and choke controls, new fresh air vents, a seat belt warning system, and a thermal vacuum system for emissions control; 2+2s received fixed rear seatbacks. 1973 brought a revised rack-and-pinion steering system and an updated version of the Model 12 automatic; hoop-style metal front overriders with collapsible rubber inserts were added. OTS production outstripped the 2+2's at 3,165 to 1,521, and this would be the solid-roof E-type's last model year.

January 1974 marked the peak of E-type monthly production, with 480 convertibles built. All wore large rubber front and rear bumper overriders, but with this modification came two fewer exhaust tips. The very last OTS was built in September 1974 and was given to the Jaguar-Daimler Heritage Trust Museum in Coventry. More than 70 percent of the 15,287 V-12 E-types built were sold in America, which embraced the car's refined grand touring character and could better accept its 14-18 average mpg. 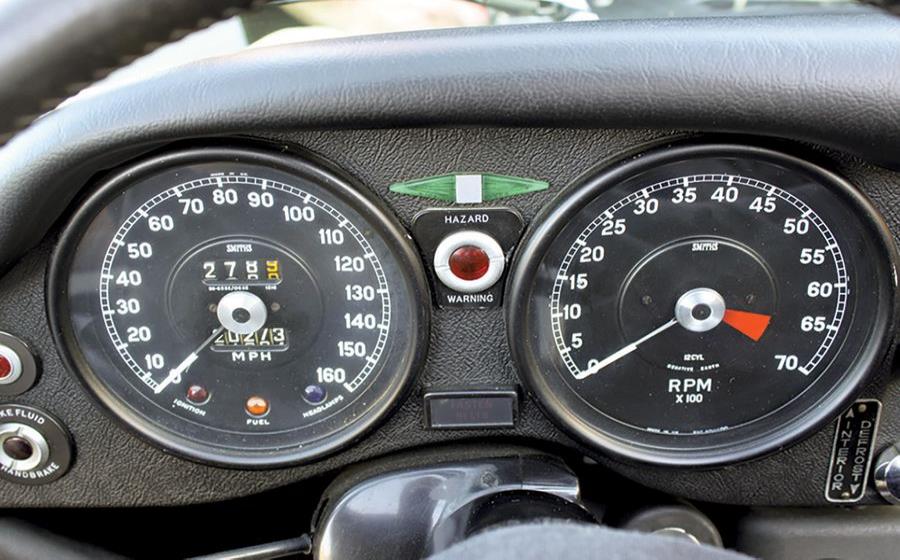 While that newfound refinement and comfort was the car's predominant trait, it doesn't preclude the Series 3 from being a legitimate sports car. V-12 E-type restoration and performance specialist Stew Jones, proprietor of Stew Jones Restoration, has based his firm's reputation not only on turning out perfect 100-point restorations, but on building some of the wildest V-12 Es around.

"I work on the V-12s because I love them," Stew tells us. "They're really a whole different car, even though there are many interchangeable parts. Many devotees scorn V-12s because they lost their way in the performance world, but they can be brought back-there's a lot more engine than the six-cylinder, and there's plenty of room to make them a lot quicker. You'll struggle to make 400 hp in a racing six-cylinder, but 450 hp is easy for us, a nice and streetable engine with more room for upgrading. The V-12 E is a smooth car, one Jaguar could be proud of." 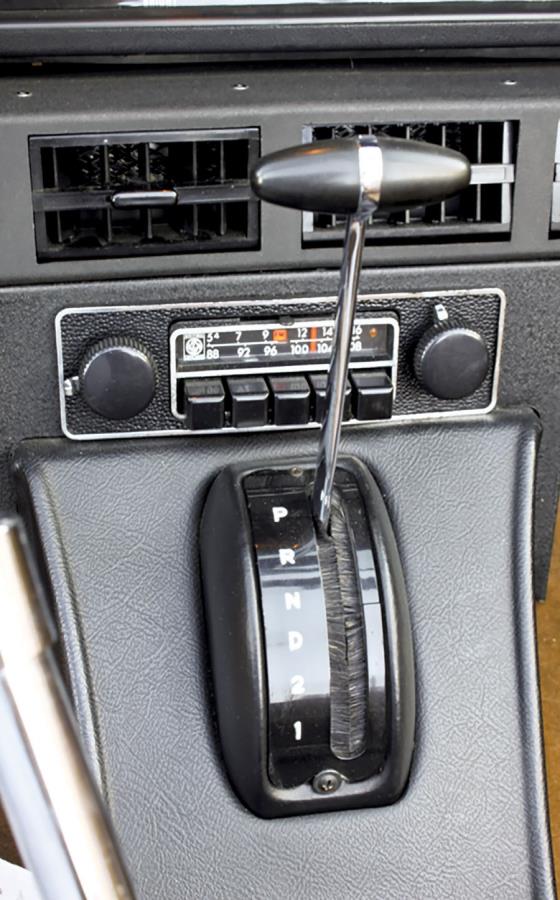 Series 3s have traditionally lagged behind the early 3.8- and 4.2-liter versions in desire ability and value, and while this is generally remains true, you'll find V-12 E-types are no longer inexpensive-although, as always, they represent a genuine bargain compared to more exotic 12-cylinder sports and GT cars.

"Virtually every panel is available, even a complete new bonnet," Stew says. "It is really expensive and difficult to restore a badly rusted E-type, so you'll want to start with the best car you can." He suggests inspecting the rear wheel wells, which have two rust points: In the front, a wad of cotton stuffed between panels as a sound deadener holds moisture; and in roadsters, wet floors may rust into the front of the rear wheel arch. OTSs and 2+2s can both have rusted lower front valances, where water draining from the headlamp scoops can collect.

An issue specific to OTSs is the joint between the B-pillar and rocker panel, which inevitably cracks: "This seam was leaded at the factory, but it often failed, although the failure was only cosmetic. Coupe roofs trussed those cars, so coupes' seams weren't subjected to such force. We rebuild and reinforce the panel to prevent this from occurring," he explains.

Series 3 V-12s share their older siblings' good interior parts availability, and their relative simplicity means that they're easy to restore. "The 50-year-old leather seat facings can get stiff, and seams may come apart a bit, but kits are available from a number of vendors," Stew explains. "I like to fit roadsters with a Robbins top featuring a zip-out rear window. This wasn't factory, but it makes for a nicer car. The factory air conditioning really worked, too-Jaguar used a huge Frigidaire compressor, also used in GM cars and trucks, that made a lot of cold air." 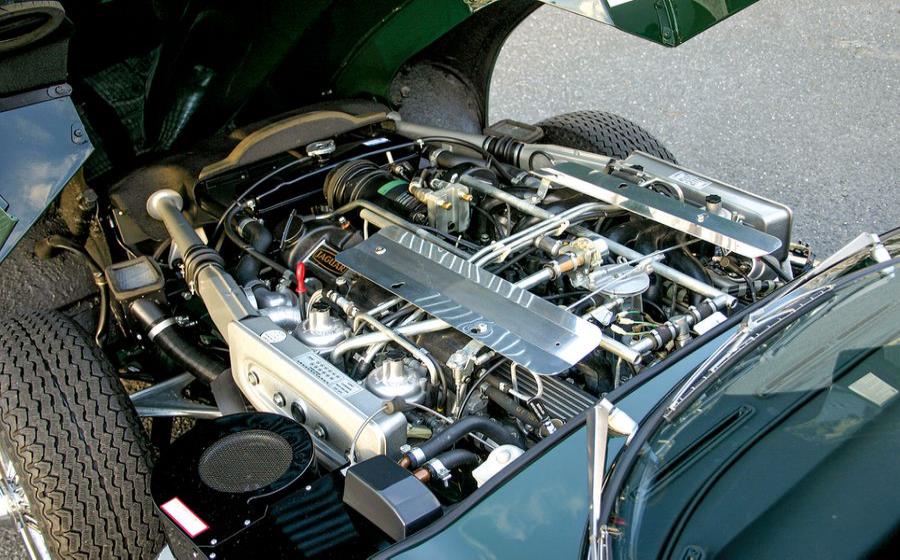 Jaguar's V-12 used a 90 x 70-mm bore and stroke to displace 5,343-cc. It had a forged steel three-plane crankshaft with seven main bearings and wet cylinder liners. Four Zenith-Stromberg 175 CD 2SE emissions-ready carburetors supplied fuel, and the new Lucas OPUS electronic ignition system was derived from Formula 1 racing practice. Despite its doubled cylinder count and complexity, this engine was just 80 pounds heavier than the vaunted XK inline-six. It made 272 hp at 5,850 rpm and 304 lb-ft of torque at 3,600 rpm, enough to push the car to 146 mph. An emissions- related drop in compression for 1973 equated to a small loss in power: 244 hp at 5,250 rpm.

"Jaguar's V-12s are very durable. This sounds counterintuitive, but I've seen them go 200,000 miles," Stew reveals. "There's one qualification: The ancillaries will get you. You've got to keep the engine cool, or it's trash. If they overheat, they can drop a valve seat." He strongly recommends replacing the stock Marston four-row radiator with a high-efficiency aluminum unit, and upgrading the fans and thermostats. 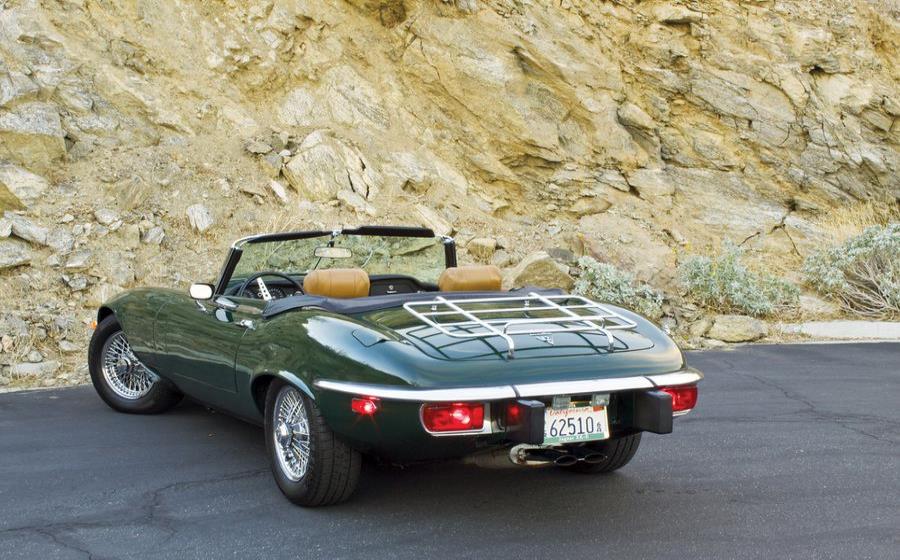 "The Lucas ignition system was pathetic. In 30 years of owning my V-12 E-type, I replaced five ignition control modules. Lucas offered a relocation kit that moved it from the engine's center valley to a frame rail to keep it cooler, but it didn't last much longer, because of poorly soldered joints. Many people make good replacements, including PerTronix and SNG Barratt." Stew also comments on the Zenith-Stromberg carburetors, which were "plagued with pollution…. They were compromised for U.S. emissions, so we 're-engineer' them to perform as they should. Everyone wants to change the carbs, but there's really no need."

It's estimated that a little under half of all Series 3 E-types were fitted with the optional three-speed Borg-Warner M12 automatics, the rest using the fully synchronized four-speed manual. Both are durable. Automatics are known to leak; easy to fix are leaks from the pan, the side covers, and the oil cooler lines. A front input seal leak is more difficult, though unlike the manual, the automatic transmission can be removed with the engine in the car. 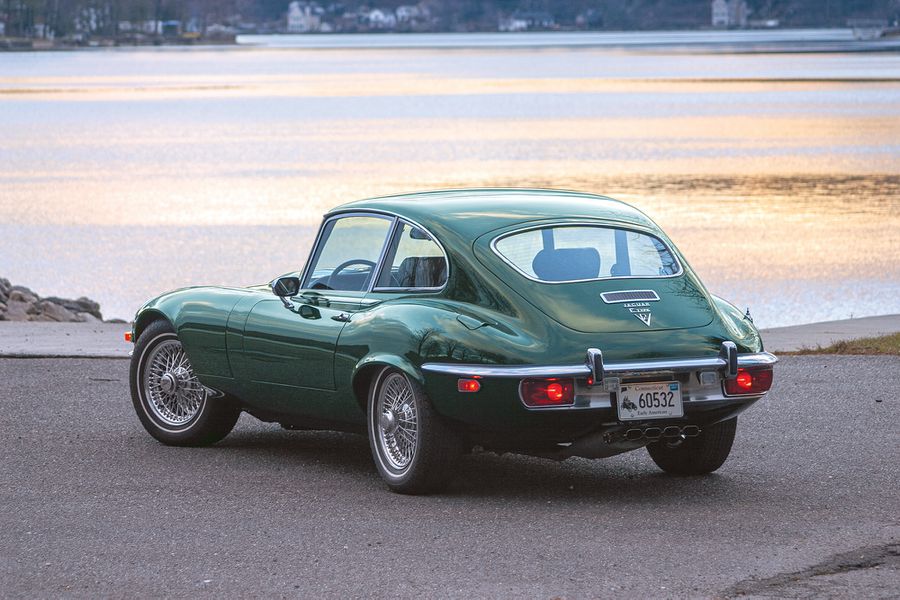 It is possible to swap these gearboxes, or to replace both with a modern five-speed overdrive transmission like Tremec's T-5, which is sold in kit form. "Modern transmissions shift nicely and allow a quieter ride at lower rpm, with fifth gear. The T-5's parts are commonly available and, in addition, you can use an aluminum flywheel and gear reduction starter for improved performance. It makes you think, when you realize that the cost of rebuilding a Jaguar four-speed is halfway to a T-5 conversion!"

The limited-slip differential was overbuilt to withstand the V-12's torque, so it rarely requires attention outside of normal service.

"The inboard rear brakes were always seen as a problem, but they work just fine, and the same with the original ventilated front rotors," Stew notes. "The suspension cage limits the rotor size you can use, although you can upgrade to ventilated rear discs."

The front suspension's adjustable caster makes it easier to tune than the basically similar six-cylinder version, although the 12-cylinder car's loss of a rear anti-roll bar makes the car lean towards the luxury side of the ride-handling spectrum; "I love adding a rear anti-roll bar, because it changes the personality of the car, moves it back to sporty.

"The stock 205/70-15 tire size is unusual these days, but Michelin and Pirelli make good speed-rated tires in this size-the Michelins come in whitewalls that look correctly vintage," Stew continues. "When you run modern tires on the original wire wheels, you have to run heavy-duty tubes that can handle the stiffening ridges inside the tires. Dayton makes wire wheels in different diameters and widths with a sealed inner surface that allows you to run tubeless tires."