Racing driver Greg Murphy and artist Otis Frizzell have collaborated to create an enormous piece of art in an abandoned Auckland carpark.

Otis Frizzell sketched out a a 120m x 60m metre abstract art piece and invited Bathurst winner Greg Murphy to race along his sketches in a Jaguar I-PACE, with the experiment captured by long-lens photography to produce a stunning piece of art.

The concept is believed to be a world-first, and one of the largest and most ambitious creative interpretations of long-exposure photography.

The risky experiment took place in a carpark at Mount Smart Stadium last month, was the result of months of planning, and required an expert health and safety crew to execute. Jaguar has released two new videos showcasing the finished product and a sneak peak behind-the-scenes.

"Out of all of the creative projects I've been involved in, this one has to be the most bonkers," admits Otis Frizzell. "It was pretty touch and go as to whether this would even work. We were attempting something on a massive scale, but thankfully the performance of both Greg and the individual photographers meant the experiment was a success."

Greg Murphy completed the task in the Jaguar I-PACE, an all-electric performance SUV with superior precision and road-handling features, to navigate the tricky sketch from Otis. 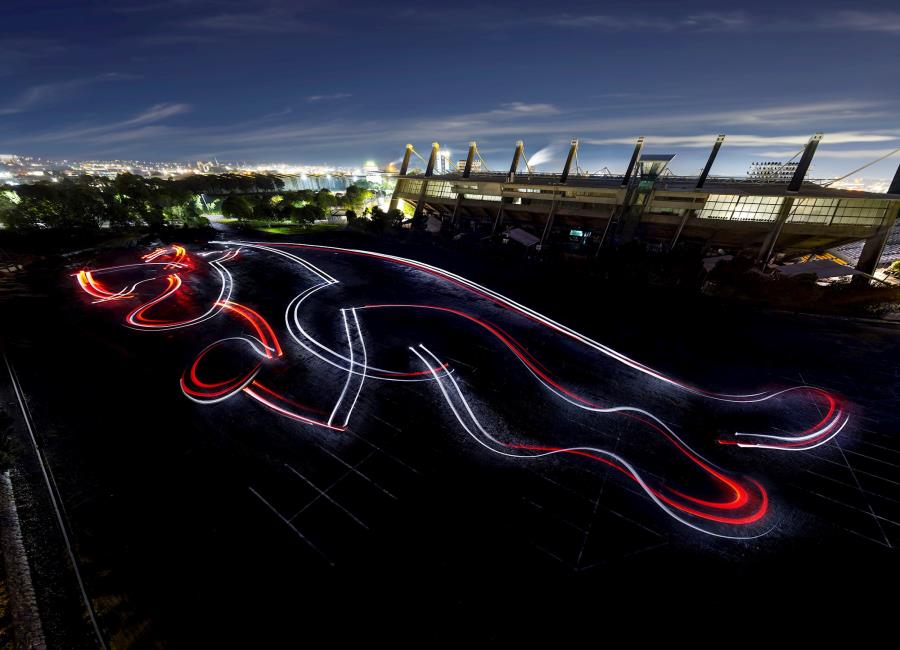 "I like to think I'm a pretty good driver," said Greg Murphy. "But this still took me hours of driving across two nights to get right. Otis had a vision of the way the car needed to move, and was shouting in my ear pretty much non-stop about when to turn and when to brake."

"I was essentially flying blind around a dark carpark in Mount Smart, putting all of my faith into Otis's vision. I'm proud of the results, I can't quite believe we managed to create it."

Jaguar New Zealand general manager, Steve Kenchington, commented: "I had a bit of a chuckle when I thought of one of our most prominent artistic families collaborating with our greatest racing legend - but it simply reinforces the fact that art and performance working together delivers stunning results. We'd like to extend our sincere thanks to Greg Murphy and Otis Frizzell for their vision and ambition."

Jaguar has released 400 copies of the limited edition print which will be gifted to new or returning Jaguar owners as part of a customer relationship management strategy.