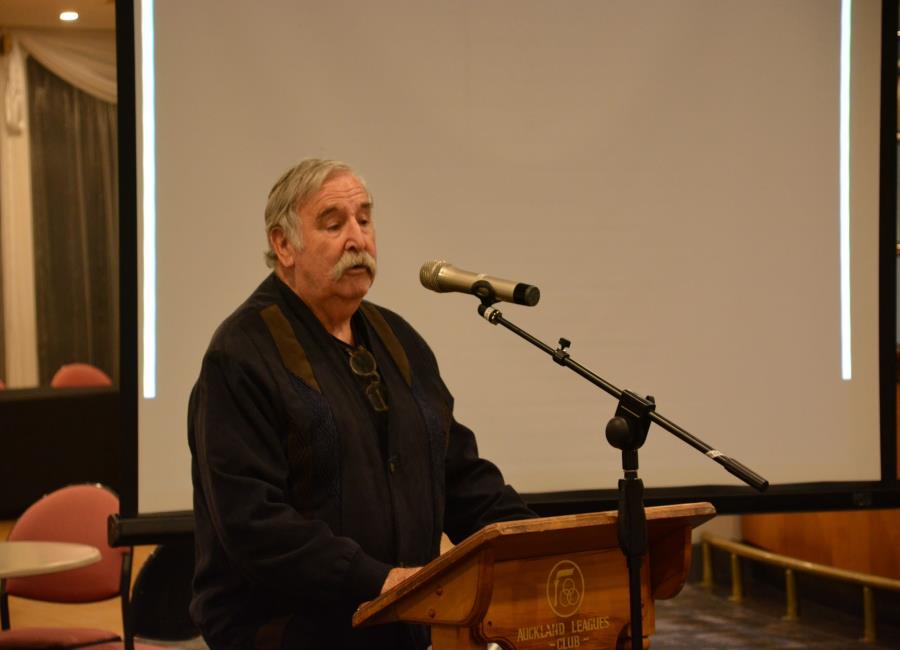 Dean Wright introduced our special guest for our May Club Night, Classic Car afficionado Garry Boyce. His subject was not as people may have expected, the Ellerslie Concours or his extraordinary collection of very special Mercedes, Bugatti and Alfa classic cars. Rather it was to tell us about his other rather less known passion; classic car rallying across the planet. My words cannot really convey this amazing story as Garry told it, but I've tried to summarise just some of his extraordinary "Adventure before Dementure" as he describes it!

Garry Boyce and Ken Williams, his equally intrepid companion, racer, co-driver and co-mechanic have traversed some of the most extraordinary roads in the world from the Targa NZ, numerous trips across the Australian outback, the Inca Trail in South America, culminating in one of the most extreme Rallies of all, the Peking to Paris 2019.

In March 2019 Garry shipped his remarkable 1964 220SE Coupe off to China. This is the very same venerable Merc Garry and Ken have rallied in at least 5 cross Europe rallies, a similar number in Australia and in 2018, Peru. 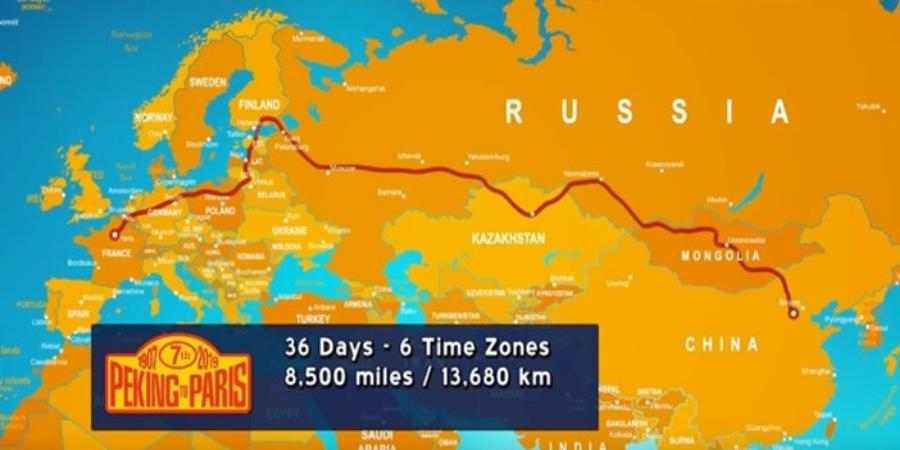 These trials over 15 years were all huge endurance feats for car and occupants alike, but nothing compared to what lay in store on the P2P as Garry refers to it.

Garry stressed that these earlier trials were very necessary preparation for both car and its occupants. They properly tested various endurance additions such as an oversize 92 litre fuel tank, very knobbly truck tyres and a large under pan protecting the engine, exhaust and transmission. Their meticulous preparations contributed to the fact that Garry and Ken never once required mechanical assistance of the P2P Rally Support crew over the entire 13,600km, 36 day journey. 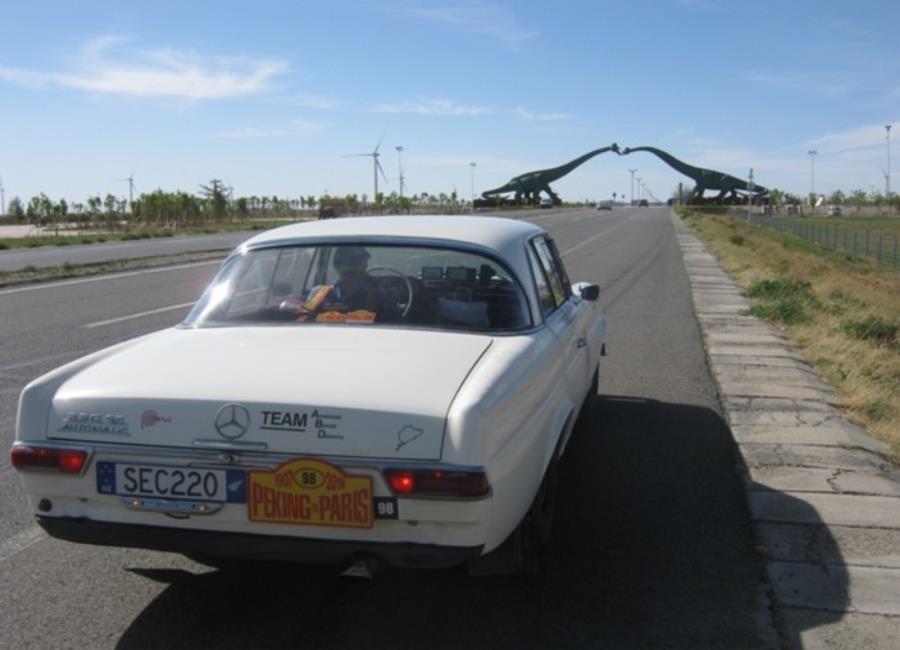 They left Beijing on 3rd June headed for Mongolia having promised the organisers and the Chinese Police to be good boys, obey all road rules, not speed or do anything that would bring a bad name to the rally! After a Chinese traffic jam, some missed turns on the tulip rally route and then a breakdown caused by closed points, they were seriously late for the first checkpoint and lost 60 points on day 1. Not a good start as they were now 57th out of the 73 classic cars that started.

Day 2 was better with a grass gymkhana section where Ken's prowess as a race driver meant they set an excellent time, followed by transiting across the Gobi desert! No roads, just multiple rough tracks through the desert, running parallel. The centre track, usually the oldest and roughest. The outer tracks in better condition, but all were rough, with ruts deeper than the Merc's wheel clearance. Then came gullies and major holes that just appeared out of nowhere! The car fell into them at speed and bang, down they went onto the belly pan, with major impacts through the car, all the time trying to maintain target speed to make the next STC (sporting time control).

Ken and Garry decided that the target times given in the Rally instructions were just not achievable if they wanted to actually drive their car into Paris. They continued at the best speed they could without destroying the car, but all the time eating the desert dust that seeped in through the tiniest holes.

After a week including a couple of freezing nights in a desert camp they had their first rest day. They worked on cleaning up the car, getting some of the dust out, trying to find where it came in and repairing broken belly pan fixings. 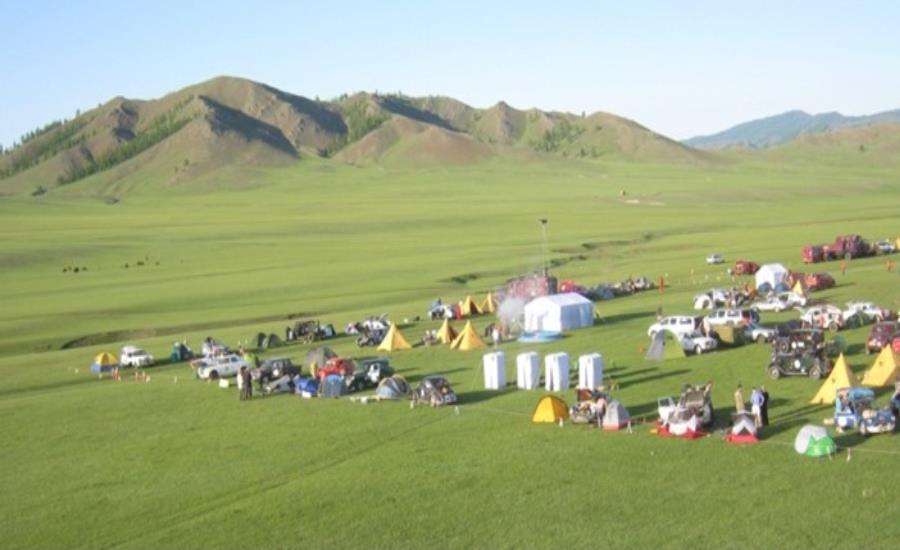 To their delight they found the first good coffee since leaving home, they did great flat whites. More good news, the organisers revised the points system and the penalty points Garry and Ken received for their first day's indiscretion were halved. Even better, with the fast pace they had been setting they were up in 23rd place out of the 57 runners.

Back into the Mongolian desert and more tracks that were car and people breakers; the list of retired cars growing day by day. On to what was the toughest day of the rally. Even the veterans of previous P2P told Garry this was the roughest, hardest day they had ever experienced. The mountain pass to the 7,500 ft summit was the barest of rough tracks that they just bounced along from rock to boulder and then into mud. At one point, charging through the mud, the limited slip diff locked up, with both wheels spinning, they slid sideways and back into a bank with both rear wheels off the ground. Luckily no damage done; a Rally "sweep" 4X4 just happened to be nearby and after a quick hook-up they were moving again in just a minute. 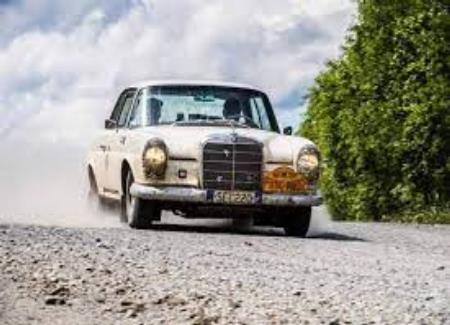 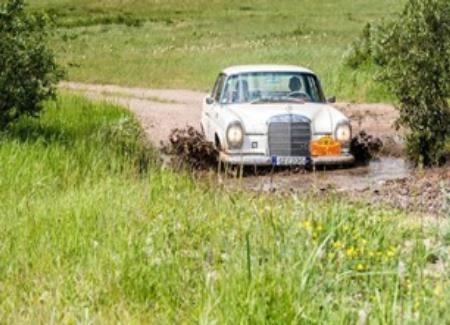 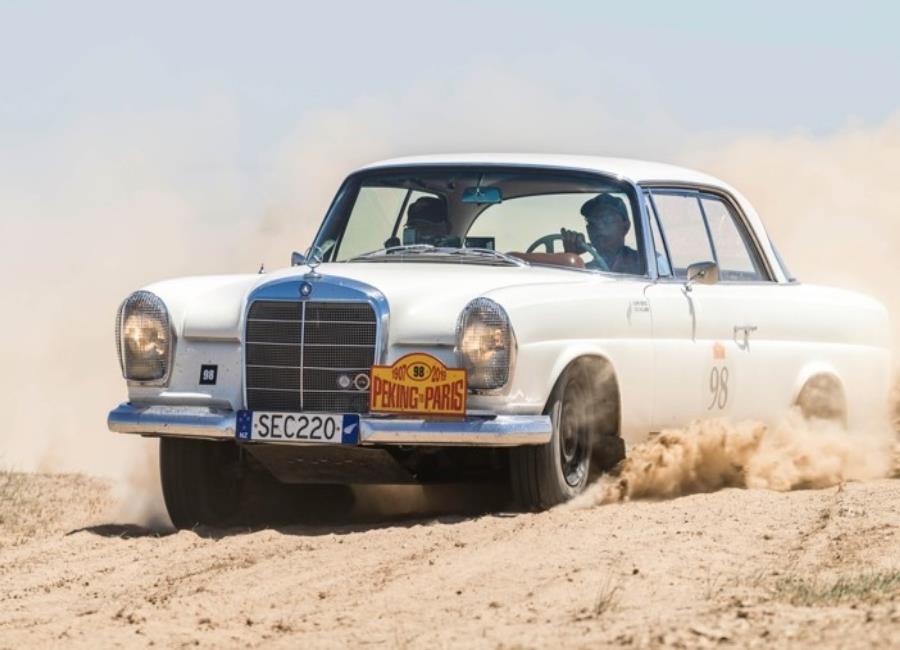 They got over the top, but many of other cars didn't. Of the 105 cars (73 classics and 32 moderns) that started the rally, only 77 clocked in at the Achit Lake Camp that night. The Merc's belly pan had had such a hard time on the ascent it had been pushed up and deformed the steel sump. So off came the belly pan and sump to ensure that the dented sump was not obstructing the oil feed to the pump. They easily hammered the sump back into shape and the belly pan flattened out by setting it up on some wooden blocks and getting their friends in a Rover 90 to drive over it!

As they dropped in altitude from Mongolia into Russia the country changed dramatically and they could have been in the Canadian Rockies, green with many types of fir trees, rocky outcrops and rivers. On the first special stage on shingle in Russia, the belly pan was smacked hard again, this time up so high that the hand brake would jam. More kiwi ingenuity was harnessed at the next camp to straighten it out again. 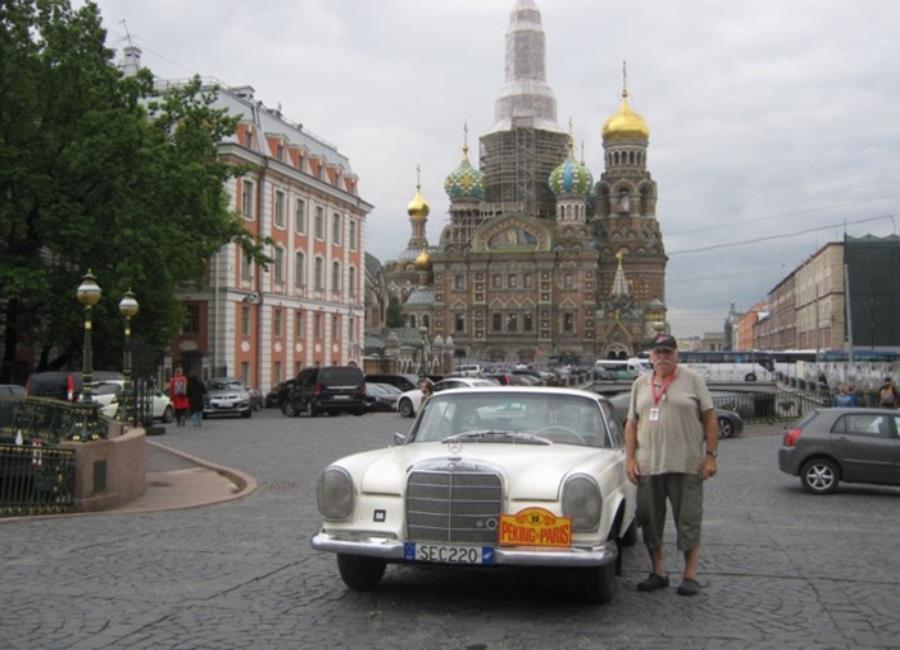 In Russia, roads are graded from 1-10. A smooth tarmac road is a 10, but within 50m can suddenly revert to a 1, bouncing from one huge pothole to the next! The shingle roads were far better than the tarmac. Their instructions told them after the Russian town of Kamyshi and on to a gravel speed test section. Only it wasn't gravel; just Siberian MUD the consistency of thick porridge with an average depth of 200 mm with invisible pot holes below. The test was 16km with a target time of 12 minutes, requiring an average of 80.3 kph. In these conditions this was impossible, even for the best prepared classic Paris - Dakar Porsches.

Then across the border into Kazakhstan, a fascinating country of many contrasts. One moment, travelling fast on four and six lane concrete motorways; the next bouncing along again on rough shingle. 60 year old Soviet era coal fired power stations, belching carbon into the air. No talk of global warming here, just on how much coal and oil can be sold. 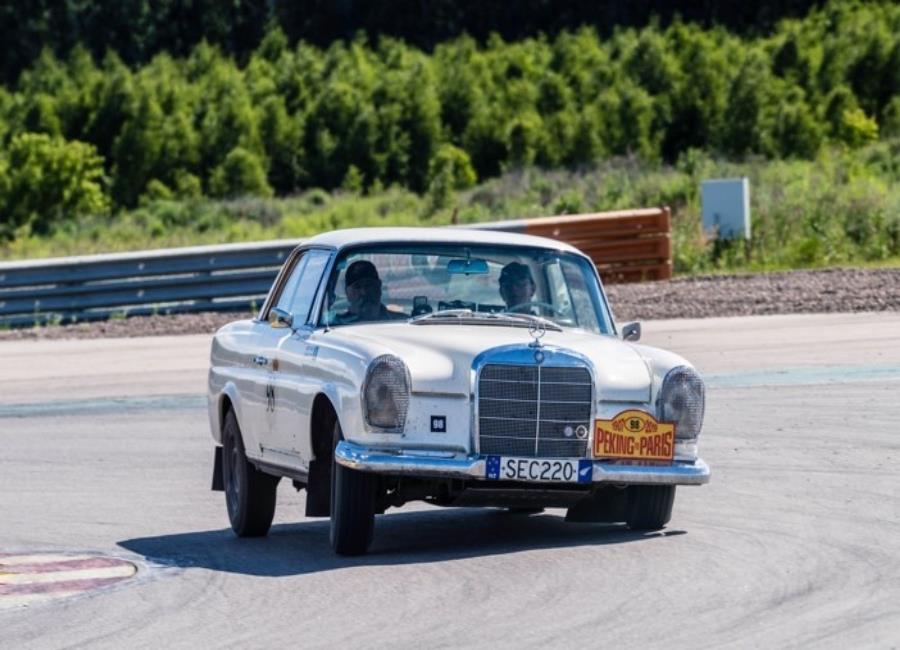 Day 18 of 36 and back into Russia and on through cities of Ufa, Kazan, Nizny Novogorod, Zavidovo and St Petersburg. Now in 19th place, they were the top Mercedes W111 and the 3rd Merc of 11 starters. During the next week, they improved their position to 17th, covering nearly 2,400 kms, passed through 8 time controls, 2 sporting time controls, 8 passage controls, 5 test start/finishes; ALL on time, along with 2 time zone changes.

Moving west in Russia, every aspect of life looked more affluent and European. The roads got better, the number of pot holes per km halved.

On Day 29 they crossed onto the Gulf of Finland and an extensive motorway system with spectacular bridges around the outskirts of Helsinki. Smooth roads with no pot holes, no rubbish, not a fag butt, not a piece of plastic, not a drink bottle, and trimmed grass to the road edges.

With the really rough stuff over, it was now a matter of maintaining the car's reliability for the next 1500kms and performance for the more speed sections. Into Belgium to a small track called Peugeot test track. It was at Spa just beside the F1 track. This was the last track in the rally and Ken's last chance to rip some more rubber off the tyres!


His grand finale performance lifted Team Adventure before Dementure up to 10th place in the European cup.

The final run to Paris was always going to be a transit run, some country villages and back roads through PC controls but you eventually end up on the A1 entering Paris around the Charles De Gaulle airport, and into traffic mayhem.

On to the periphery and clockwise around to enter through Bastille, through red lights, down bus lanes, along past the Louvre then a right turn and we were at the Place Vendome. They had done it!!

For many reasons this event was sanctioned by the FIVA. (Federation International des Vehicules Ancients) and their officials had been present with a watching brief over the whole rally. So, Garry and Ken were completely dumbfounded to be presented with a special trophy called the Spirit of FIVA for the 'most original car' and for representing what the FIVA representative deemed to be the 'sprit of the event'.

To say they were overwhelmed by this accolade would be a total understatement, especially after their dismal start in Beijing. Garry and Ken finished an amazing 15th out of 73 cars in the classic division and 9th in class; a massive achievement. 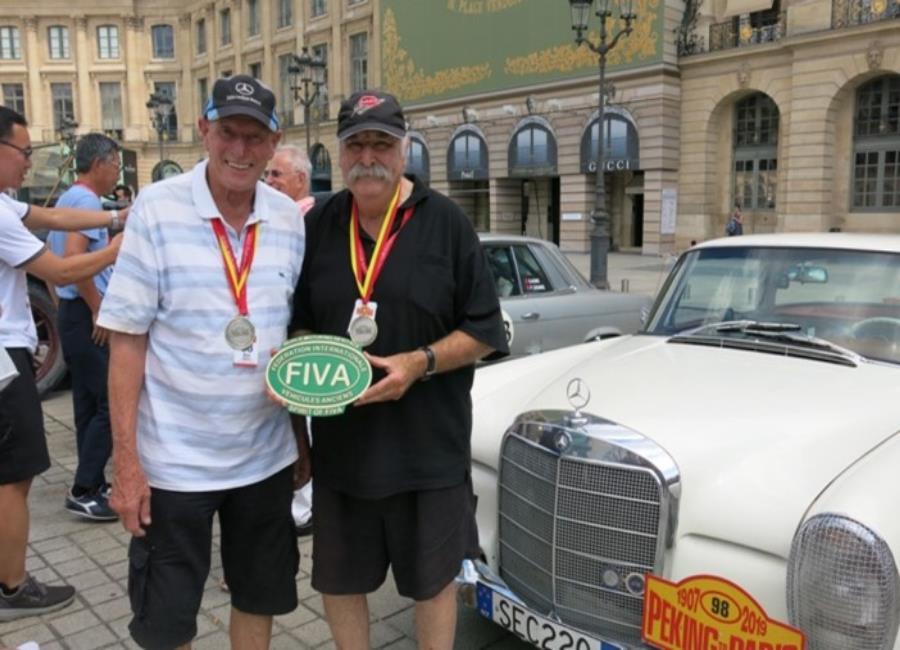 At the conclusion of Garry's enthralling presentation dozens of us were able to pour over the actual route books from Garry & Ken's rally and their detailed logs, gleaning more information.

Thank you Garry for sharing your extraordinary passion and for giving us such a wonderful insight into what is the reality of this most extraordinary Peking to Paris endurance feat for both the cars and their intrepid occupants. 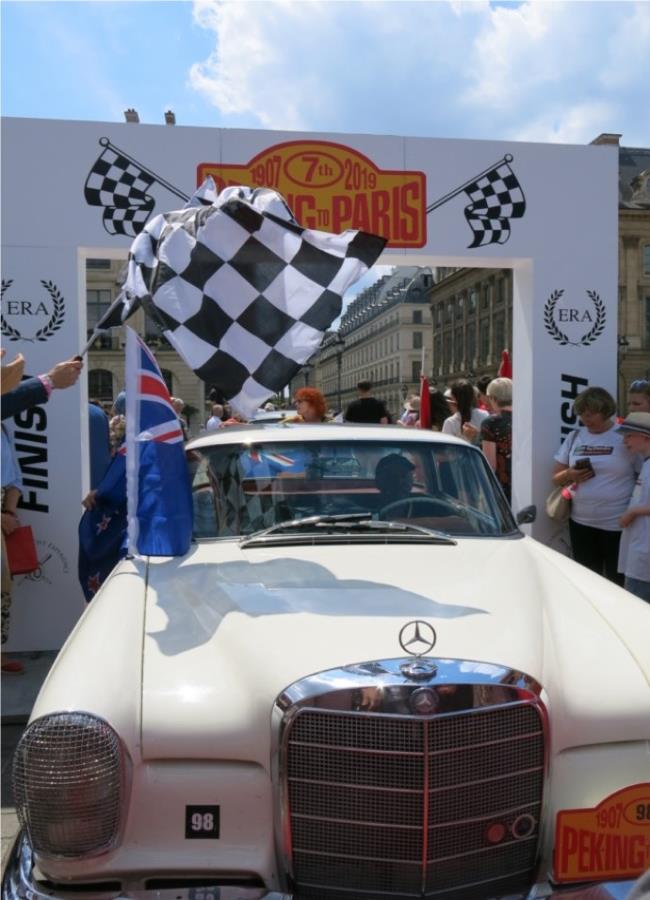