This vehicle crashed 25 years ago is set to sell at auction for £10,000 - but fully restored it may be worth a QUARTER OF A MILLION POUNDS. 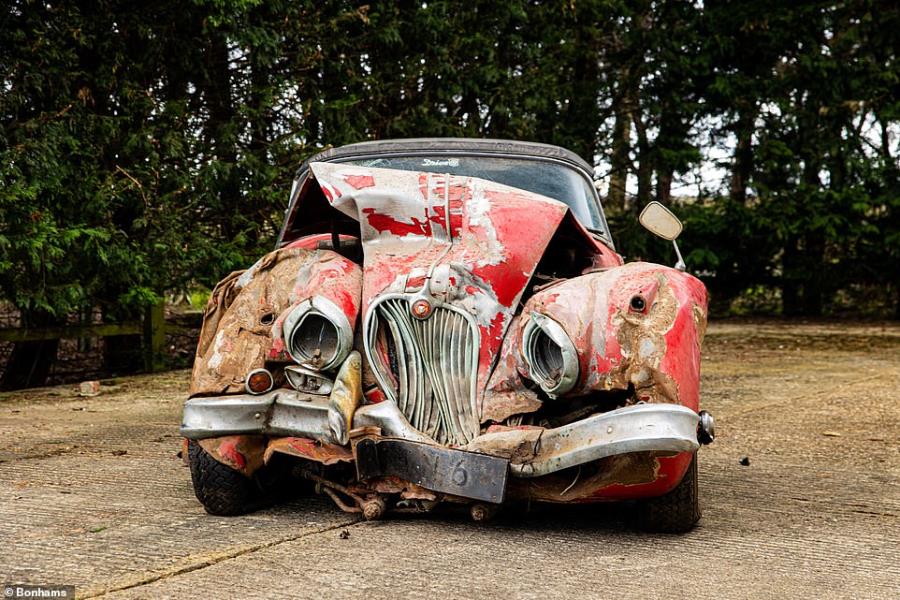 We've seen plenty of classic car restoration jobs in our time, but the salvage project facing the winning bidder of this particular auction item is undoubtedly a daunting prospect. However, buying it could be a very lucrative decision in the long run, according to experts.

This rare 1960 Jaguar XK150 S 3.8 Drophead Coupe has seen better days - in fact, it currently looks less like a Drophead and more like dropped-on-its-head.

While that might seem steep for a motor in such a catastrophic state of disrepair, the selling auctioneer says it 'looks worse than it is' and the financial return of restoring it to its former glory could be extremely profitable indeed, claiming it could be worth up to £250,000!

The smashed-up Jaguar is being offered to potential buyers at the upcoming Bonhams MPH Auction on 22 May, which will be a live 'drive through' sale with each lot driven in front of bidders so they can hear each one being started up and running, rather than just on static display. 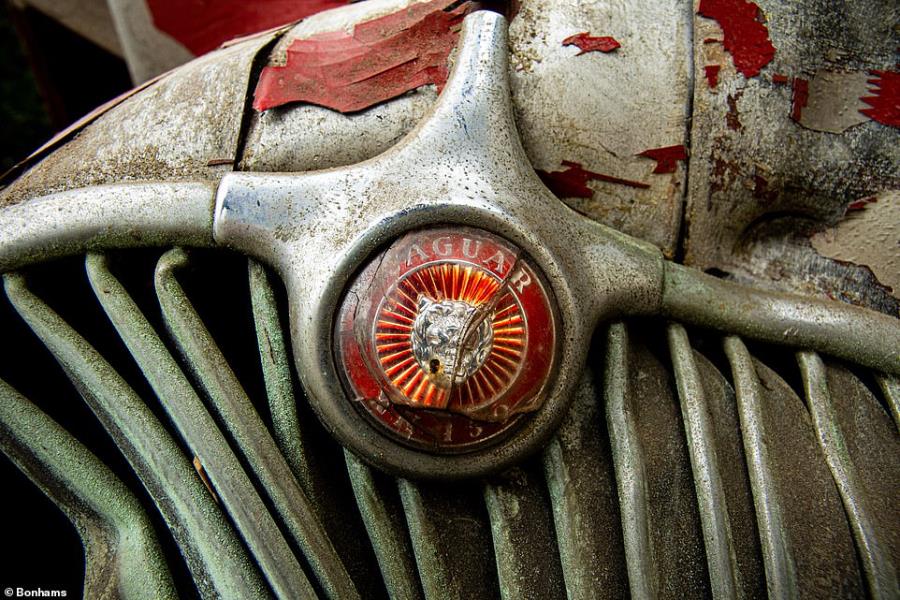 It is one of the vintage motor lots that will be sold alongside the 2013 Range Rover previously owned by the Duke and Duchess of Kent, which is estimated to achieve between £30,000 and £40,000.

While the Royal Range Rover remains in exquisite condition, the same can't be said about the Jaguar, which will likely need to be towed across the auction room floor as part of the 'drive through' sale. 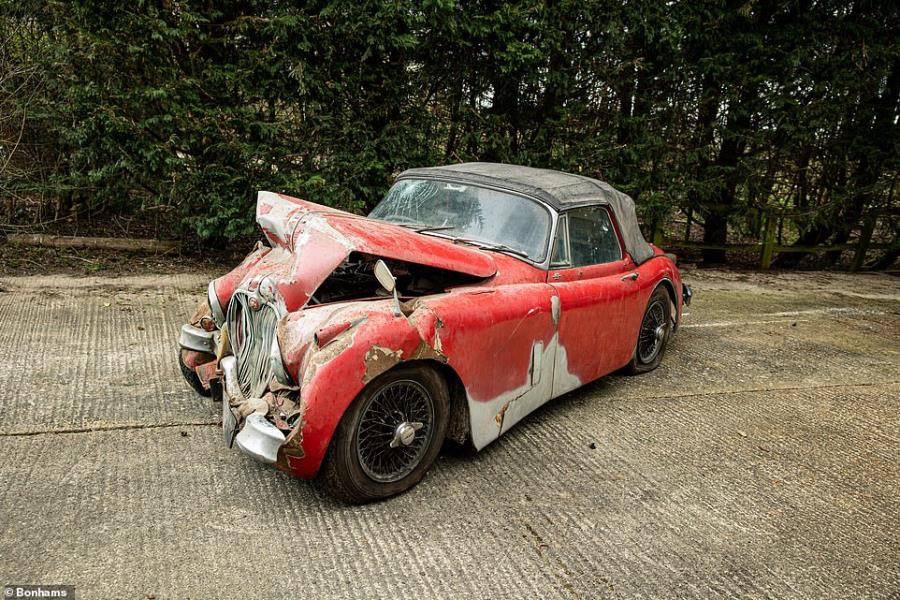 However, the battered example of the 1960 sports car is much rarer than a mass-produced gas-guzzling SUV - and far more valuable if refurbished to a high standard.

Just 2,672 examples of the XK150 were made by the British marque at its Coventry assembly plant shortly after the Browns Lane factory was rebuilt following a fire in 1957 that infamously claimed 9 of the 25 ultra-exclusive XKSS road cars featuring the le Mans-winning D-Type's engine.

The 3.8 S version was built between 1959 and 1960 and 282 were produced in total - and only 69 were right-hand-drive Drophead Coupes like the red rubble being auctioned in a few weeks.

The XK150 is an often-overlooked vintage model from a glowing era for Jaguar, especially with its immediate successor being the renowned and now iconic E-Type. But, in decent condition, it's still worth a pretty penny

The 3.8-litre, straight-six-cylinder petrol engine fitted to 'S' versions like this one - in its heyday - produced a claimed 265 horsepower.

Accelerating from rest to 60mph took 7.3 seconds and the top speed was a then mesmerising 136mph. Fuel economy was just 18 miles per gallon - around the same fuel efficiency as a 2017 Ferrari F12 Berlinetta with a thunderous V12 engine under the bonnet.

The XK150 is also famed for being the first car to ever offer disc brakes on all four wheel (as an optional extra), which were 305mm Dunlop parts.

Dunlop Road Speed tyres were standard, though buyers could pay extra for 16-inch radial Pirellis. There was also the choice of solid wheels or - pricier - wire wheels, as this one has.

The owner of this battered example - first registered in 1 January 1960 and finished in Carmen red paint and a black leather interior - bought the car some 50 years ago, in late 1971.

He drove it for almost 25 years without issue. However, in September 1996 while on a wet road in Hull, East Yorkshire, the vendor and his Jag had an unfortunate encounter with a tree, which resulted in the damage to the car that you can still see the full extent of today.

With the bonnet crumpled, grille bent, headlights missing, engine shoved back towards the cabin and 'NRN 6' front registration plate twisted almost beyond recognition, the once proud Jaguar's face is a sorry looking affair.

And it looks like the driver took a fair whack too, with the steering wheel taking the brunt of the impact and snapping under the force of the 1996 shunt.

Fortunate enough to walk away from the accident unscathed, the keeper picked up the car from the scene of the incident on a trailer and transported it to his garage at his property.

And it's there the car has remained ever since, under the premise that it would be restored.

Having failed to get around to the job, and the car standing in a garage for over two decades and accumulating plenty of dust and cobwebs in the meantime, the vendor is now offering the crumpled Jag as a 'restoration project' to the highest bidder.

Showing to have covered 115,763 miles in its 61-year life, the Jag was clearly a used - as well as treasured - motor, and despite the condition today still retains almost all of its original parts, most importantly the engine. 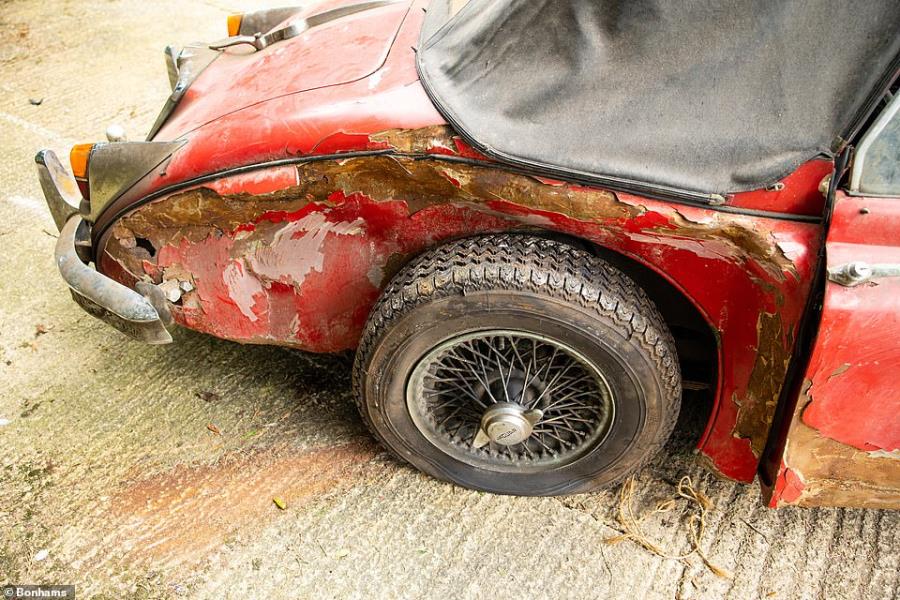 That said, it will need a substantial financial investment on top of the auction purchase fee - and plenty of hours in a workshop - to bring it back to its absolute best.

Rob Hubbard, head of Bonhams MPH, explains exclusively to This is Money that the car 'looks worse than it is'.

He told us: 'It has all its original leather and the original matching-numbers engine, which needs to be overhauled as it has not started for more than 25 years.

'The steering wheel is broken, from the impact of the crash. However, parts are plentiful and relatively easy to obtain.'

And if the new owner completes the rebuild properly and gets the car back on the road in a fabulous condition, it could be worth a cool quarter of a million pounds, according to the auction house.

Interested bidders can take a closer look at the mangled classic a day ahead of the sale, with the vehicle being showcased at Bicester Heritage in Oxfordshire on 21 May. 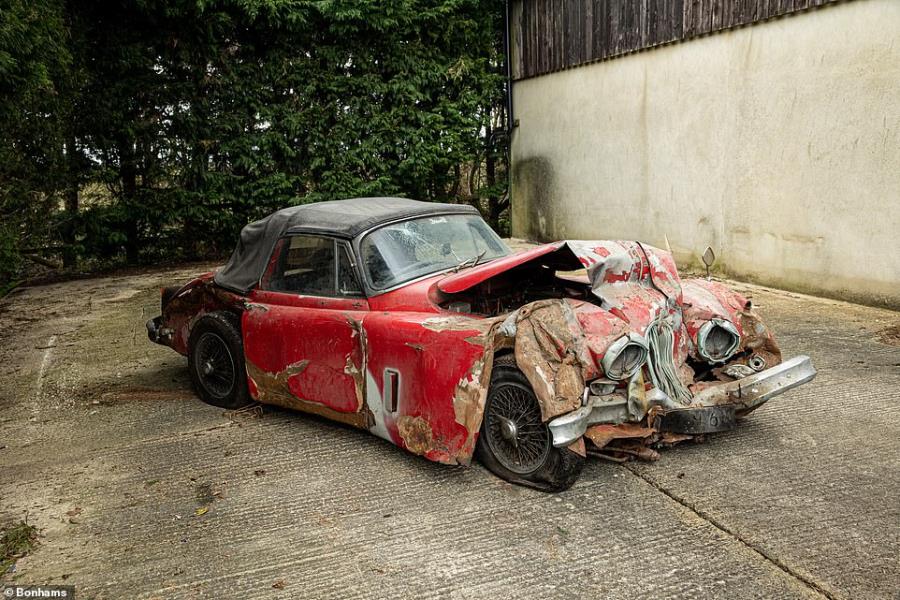 Potential buyers - who won't mind getting their hands greasy and forking out for new parts - can then decide if they want to raise their bidding paddle when the sale takes place on 22 May.

Take a virtual tour of the unique vehicle by clicking 'here'.