Rare find - One of only five ever made.

When Jaguar showed the world the XJC at the 1973 London Motor Show, it was a car that wowed the crowds. However, it simply wasn't ready for production, and as such, it took another two years for it to roll into dealerships. And when it did, it was still an unresolved product. There were issues with window seals, wind noise and so on. The solution, the wanting public shouted, would be to cut the roof off. An XJ would lend itself to being a convertible - the long, flowing design was begging for such a conversion. Jaguar, however, was unwilling to oblige.

Happily for the car, the British are an industrious lot, so when Jaguar said it wouldn't make a convertible, several companies decided they would take matters into their own hands. One such company was Ladbroke Avon of Warwick. But they went one step further and decided that if it was going to cut the roof off something, it may as well be the best. So instead of ordering a handful of Jaguar XJCs for the conversion, it instead gathered a small number of Daimler Double Six coupes, complete with that magnificent V12 engine.

Only five of the Daimler Double Six Avon-Stevens Convertibles were built. One now lives in France, one in Germany, one in Japan and two in the UK. And it's one of those two that you're looking at here. This is, make no mistake, a very special and very rare car indeed. 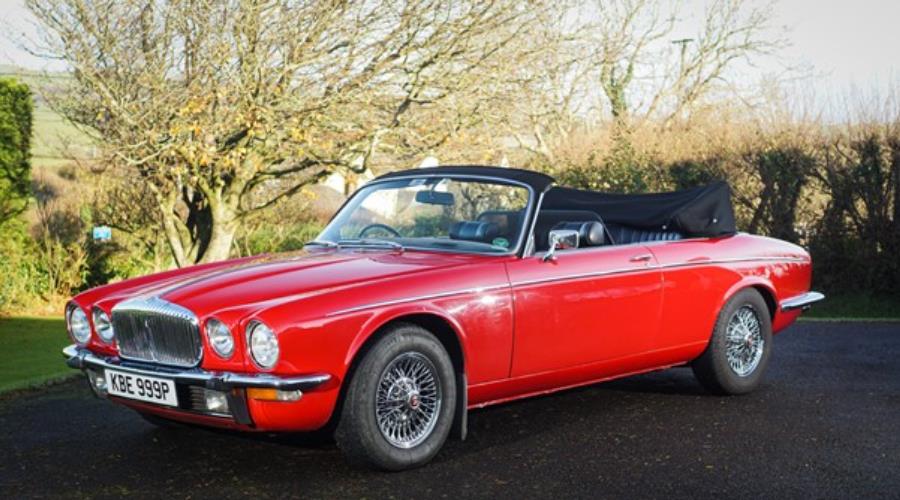 This particular car was bought on the 1st of March 1976 by Deborah Services Ltd before being sent to be converted into a Avon-Stevens convertible. It was originally Green Sand in colour with a black leather interior, and of course, a black hood featured as part of the conversion.

On the 30th of March 1982, the car was sold to its next, private owner, who would keep the car until 1994. However, by this point the condition of the car was worsening, and as such, the third owner - despite keeping the car in roadworthy condition, hardly used the car. In 2007, it passed through the hands of a Jaguar and Daimler specialist based in Middlesex and the car was repainted in the red you see it now and a new hood was also fitted.

The current owner, who had been searching for this rare Daimler conversion for some time, approached the Specialist Dealer and agreed to purchase it after the completion of some remedial works to bring the car up to a usable standard. With a fresh MOT in place, he took delivery of the Daimler and pressed it into immediate service.

That same year, the car would be used to drive to Northern Spain, in 2010 it was driven to and from Croatia, in 2011 Austria and in 2014 it went to Mallorca and back. It's safe to say this car has been enjoyed, and always with the roof down, naturally.

Throughout the car's travels, the current owner lavished all manner of care and attention upon it. New fuel tanks, replacement of nearly all the chrome, measures to prevent any corrosion, regular servicing, a new stereo, leather treatments, he fitted the wire wheels, replaced any parts as and when needed and the list goes on. Looking through the highly detailed history, the current owner has left this Daimler wanting for nothing. Which goes to explain why he has put 16,000 happy miles on it since taking ownership. 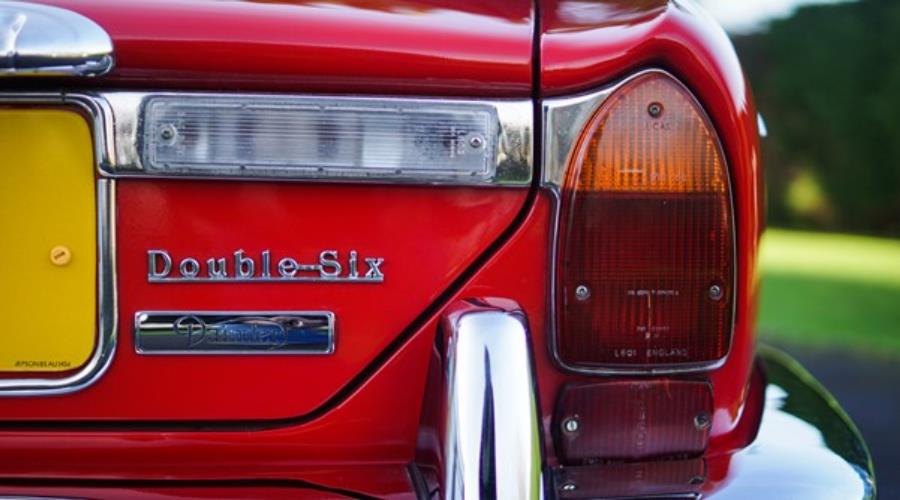 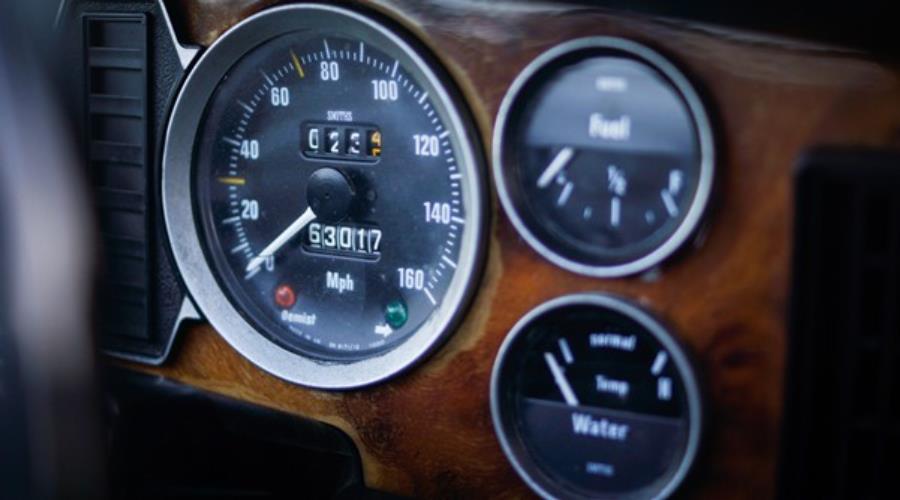 The interior of this Double Six is in pleasingly good condition, and is a testament to how well made they are - the current owner has only ever had the roof up twice (except for Service/MOTs), once for this shoot! The leather seats have been treated and well fed over the years, and as such, are comfortable and supple.

The controls and dash are all in good condition and function as they should, with all gauges reading correctly. The steering wheel is in excellent order, as is the shifter and handbrake, though of course there is some slight wear - this is a car that has been used for driving, after all.

The carpets were fully renewed by the current owner, both in the cabin and in the boot, and as such, present well. There is a complete tool kit in the boot, too. Along with a jack and a spare wire wheel. The boot is dry, and there seems to be no evidence of corrosion.

The door cards are in generally good condition. There are some signs of wear, but nothing of serious consequence other than a small chunk that is missing from the driver's armrest. The windows all work as they should, and with the doors open, looking down into the A pillar area reveals clean paint and no signs of corrosion. Both the doors shut well and neither have dropped over time.

With the roof up, the external element is in good order with no tears, though there are some stress marks and creases from the long periods during which it has been folded up. The internals are in good order, with headlining still present and reasonably taut. 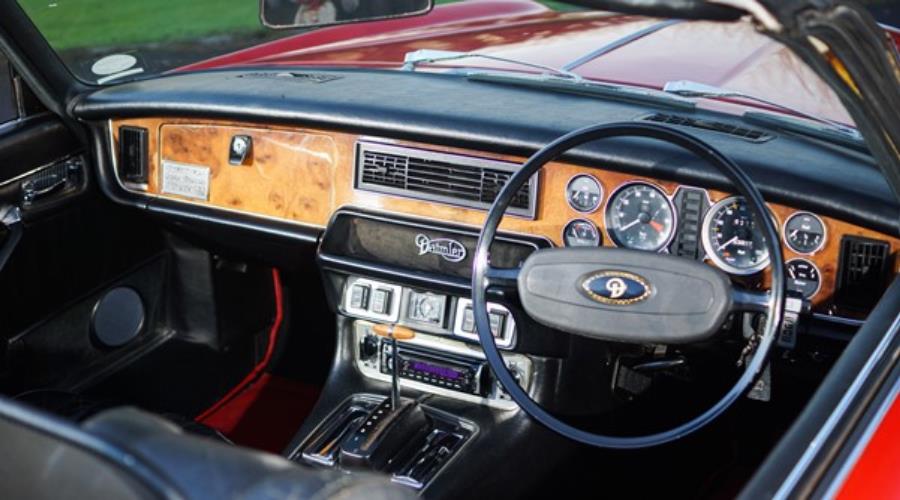 Generally, this Daimler presents well. The red paint was applied to a good standard and holds up well thirteen years after. There is some light swirling in some areas, but nothing a cut and machine polish wouldn't remove. There is no damage to observe, and all the panel gaps seem to be straight and uniform. There is some flaking/corrosion coming through on the lower edge of one door, and also on the seam line on the lower rear quarters, but this seems to be largely surface rather than anything deeper.

The chrome is all in excellent order, most of it having been replaced over the years.

The lower edges of the car seem solid, especially the sills, which are crucial on this car. In fact, looking underneath the car, we were greeted with a liberal coat of rust-proofing and solid looking structure. It's no show winner, it's a car that has been driven and enjoyed, but it does seem to be exceptionally solid.

On the whole, this Daimler presents exceptionally well. It strikes us as being a solid, well maintained old machine that has many, many more miles of life left in it.

As you will be able to tell from the incredibly detailed history supplied by the owner, this Daimler has wanted for nothing over the last thirteen years. Suspension parts have been changed, brakes, cooling system, full services as and when required, transmission overhaul, transmission cooler, a stainless steel exhaust system has been fitted, new fuel sender units, new fuel tanks, the list goes on. If this car has needed it, the current owner has seen to it.

As you might imagine, the car barks into life without hesitation and the V12 sounds beautiful. There are no rattles, no clunks, no taps. It is a silky smooth running thing. It soon gets to temperature, and stays there thanks to the cooling system being in rude health.

The transmission selects gears cleanly and without any recalcitrance and is pleasingly smooth as it does so. The brakes have been replaced and balanced, and bring the car to a stop without any unwanted drama. The suspension is largely new, and sits level and soaks up the imperfections of the roads without banging or complaining. And finally, the steering is as light and effortless as you would expect from a Daimler. The power steering is also silent in its operation.

The main points are; The rarity for starters. The current owner is deeply enthusiastic about this model and its history, and has made it his business to learn as much as he can about the cars built. As such, we can say with certainty that this really is one of two of its kind on UK soil.

Then there is the conversion itself. Yes, the roof is a bit of a two man operation, but that's the only negative. It's a solid, well engineered solution and one that feels solid and safe when put up. The fit is excellent, as is the quality of the roof itself. When up, it would be very easy, at a glance, to think this car was a steel-topped coupe. It's a nice bit of design.

The history. The current owner's attention to detail both in terms of the work he has done and the way in which he has documented it makes for great peace of mind. There has been nothing missed. It's a rare car, one that Jaguar/Daimler never made. An example of British ingenuity and engineering at its finest.